All people of all ages are welcome to the Pacific Mountain Regional Council’s community event in Prince George, celebration our Affirming Regional Council status! This outdoor street party will flow from the Regional Council General Meeting’s closing session, out to the Plaza just outside the GM meeting area – and will welcome all who join us (Prince George communities members are warmly invited!) The Affirming Celebration Street Party will feature live music from Prince George musicians, food catered from the Conference & Civic Centre, games and activities, and lots and lots of Pride! We extend huge thanks to the City of Prince George for their financial support of these festivities. 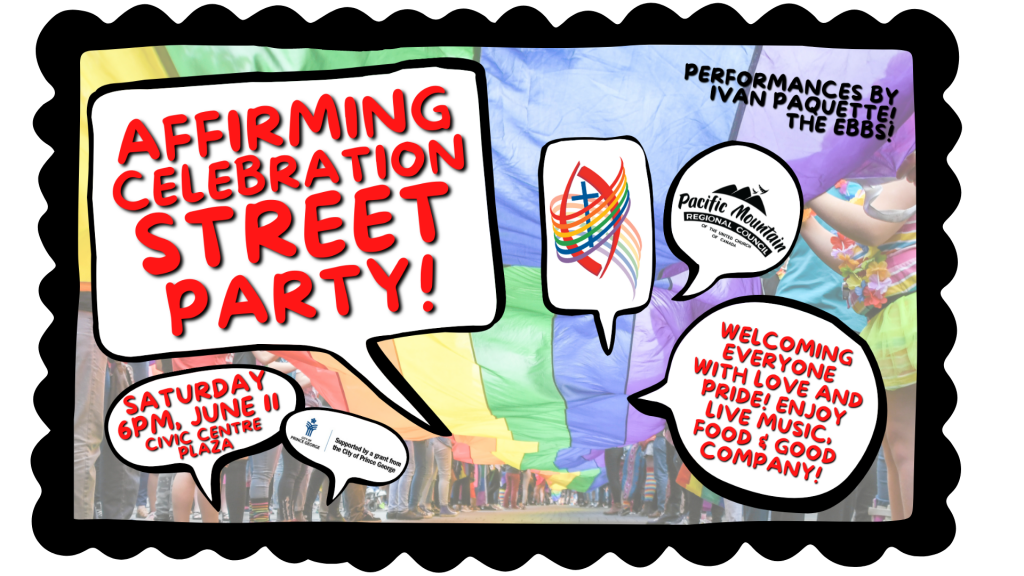 Much more information to come – come back to check this post often!

Ivan discovered performance and visual arts at the tender age of 8. With help and encouragement from his Grandmother who was a church choir leader and pianist gave him the confidence to pursue this as a career in later years. Ivan continued to perform as an actor in plays throughout his school years, as his journey led him to Vancouver to further his acting, and performance art. In 1989 Ivan started as an extra and actor playing various parts in various TV series such as MacGyver, 21 Jump St, Black Stallion, Border Town, and auditioning for major movie productions.

During Ivan’s time in Vancouver he was instrumental in helping assist Artists that were struggling and needing assistance, and compensation to his Agent. All monies received at the time went to helping artists achieve their dreams.

Ivan’s first love is his relationship with God, who gave him the ability to write songs. He wrote his first song at 15yrs old, to started playing guitar to accompany his songwriting that was getting attention and recognition and landing him a publishing contract in 1996. Ivan has a large repertoire of music and lyrics, includes Gospel, Country, Folk, etc., and many music influences.

Since 1989 Ivan has been instrumental in the Province of British Columbia and CANADA assisting artists and communities. His creative ability he has helped change the landscape in serving the arts community, creating successful government programs and services, etc. He has served on many boards and committees for many years, including 8 years at the Prince George and District Community Arts Council. Ivan is a knowledge keeper – facilitator, and is well known for sharing his wisdom to make the world a better place.

The Ebbs are an indie folk band based in Prince George, British Columbia, Canada. Singer-songwriters William Kuklis and Joe Shea, have joined forces with fiddle virtuoso Finn Scott-Neff to push their original songs into uncharted territories. The trio brings years of experience creating and performing music to the stage, and combine a range of instruments and vocal harmonies to create a new and inescapable sound in the Canadian music scene.

William Kuklis: Canadian singer-songwriter and actor William Kuklis has been commanding stages with his powerhouse vocals, emotion and charisma for over 20 years. Musically, Kuklis takes his inspiration from a wide array of genres and has been compared to artists such as Matt Andersen, Van Morrison, Steven Page, and John Popper. Williams’s music has been featured on international radio, film and television and he has performed live throughout Canada and internationally including a show at the Hard Rock Café in Reykjavik, Iceland. He has shared stages with such artists as Alicia Witt, Craig Cardiff, David Ross Macdonald, The Be Good Tanyas, and John Bottomely. As an actor, William has been seen on stage, television and film, and most recently played his first LEGO character as the
voice of Dennis Nedry in LEGO Jurassic World – The Legend of Isla Nublar which continues to air internationally. www.williamkuklis.com

Finn Scott-Neff: Hailing from the north coast of California, Finn Scott-Neff got his start playing with the Humboldt Music Academy fiddlers and has played fiddle and classical throughout his childhood. Finn transitioned to a broader range of genres in high school, and has played in bands such as Klez Encounters, Feedback, Destination Moon, and Mom is the New Dad. Finn Scott-Neff employs his passion for music and personal growth to his daily life and as guest performer with a multitude of other acts, and is stoked to be playing in The Ebbs.

Joe Shea: Born in Ontario but driven west against the prevailing winds, singer-songwriter Joe Shea builds songs around historical, fictional, and personal experiences and places. He plays a range of instruments (acoustic and electric guitars, mandolin, and keyboards) over a broad canvas of musical influences that include Radiohead, Wilco, and the Lumineers. With the musical duo Trundled, Joe has recently performed at the Canmore Folk Fest, the Coldsnap Music Festival, and fourteen stories underground at the bottom of a cave for the Spirit in the Mountain concert series. And he once covered “Common People” by Pulp for the British Ambassador to Nepal. www.josephsheamusic.ca  www.trundledmusic.com